With only two sunrises and a sunset left until I had to leave Italy, mom and I woke up super early on our second day ready to start exploring. We planned for our first excursion of the day to be a guided tour of The Vatican followed by a tour of the Colosseum, Palatine Hill, and the Arch of Constantine. 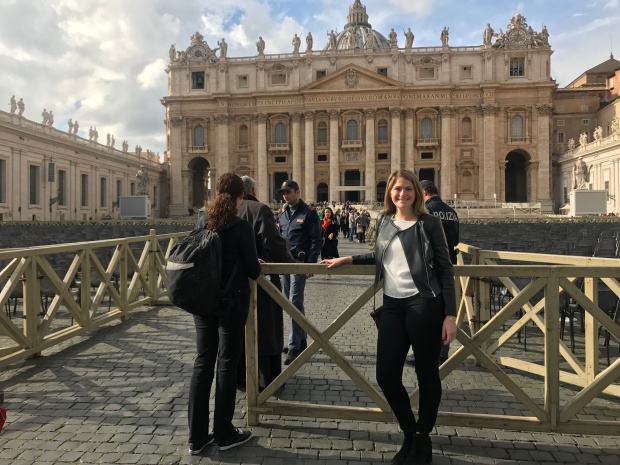 We booked our tour through Viator which linked us to When in Rome Tours. For two adults, both passes cost us a total of $195 USD. I used my 10% first-time Viator customer coupon so our total came to $176 USD. It wasn’t cheap per say, but it was well-worth it. For $88 USD each, our tour included 2-in-1 skip-the-line tickets for The Vatican and the Colosseum including tours of the Sistine Chapel, Saint Peter’s Basilica, the Vatacombs, and Palatine Hill. We also had the flexibility to visit The Vatican one day and the Colosseum the next- which we ended up doing. Even more awesome, all of tours in The Vatican were led by a  group tour guide! Our guide had an Art degree and she was SO excited and passionate and knowledgeable about all of the history behind the sculptures, paintings, murals and everything; it was awesome listening to her speak. After three hours with her I learned more about history than I did throughout my seventeen years of school! It was a bit of an information overload and I couldn’t repeat half of what we learned that morning but I’m incredibly appreciative of everything she shared with us.

If I remember correctly,  it would take well over 24 hours if you spent just five seconds looking at every single work of art in The Vatican. It is comprised of 54 museums and over 1,000 rooms. So we didn’t get to see everything, but we saw and learned enough.

FUN FACT: There is a heavily secured room with boxes on boxes of penises belonging to the many statues throughout The Vatican. Since it a Papal residence some of the statues were modified based on the reigning Popes’ preferences throughout the centuries. While some Popes chose to add a fig leaf to cover the modesty of nude statues others chose to have those modesties removed. Unfortunately for this guy, his little buddy is in a box somewhere, likely never to be seen again.

Crazy seeing sculptures on a ceiling, right? THESE AREN’T SCULPTURES. Many rooms had these incredibly intricate ceilings with what I would’ve sworn were sculptures built into them, but they were paintings. I can’t even begin to imagine how much these artist’s arms and necks hurt after painting with such deliberation and detail.

Bust of Roman Emperor Hadrian, Reign from 117AD to 138AD

In one room, we were allowed to touch the statues… I couldn’t resist myself. 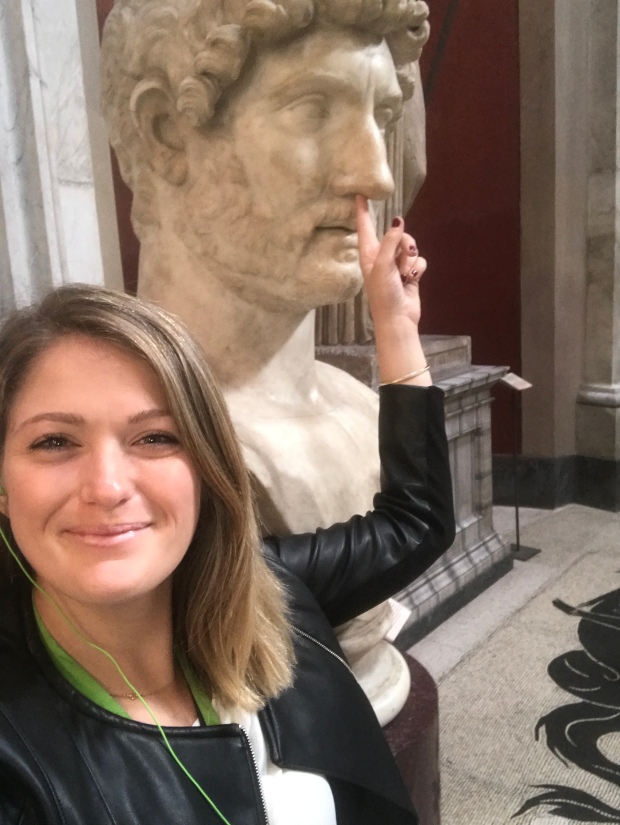 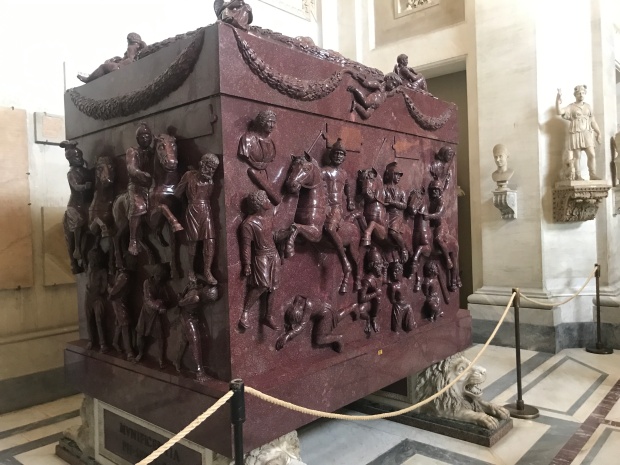 There were a surprising number of tombs/sarcophaguses throughout The Vatican museums. It felt a little morbid but also pretty neat to see how respected some of these historical individuals are. The sarcophagus pictured above holds the remains of Saint Helena, mother of the first Christian Roman Emperor, Constantine the Great. Constantine is known for transforming the Roman Empire in that he recognized God as being the Most High – even above himself. And not only did he allow Christians to believe what they did, but he protected them from persecution. He also went on to create the Catholic Church. In regard to Christianity, Constantine’s reign of the Roman Empire changed everything. 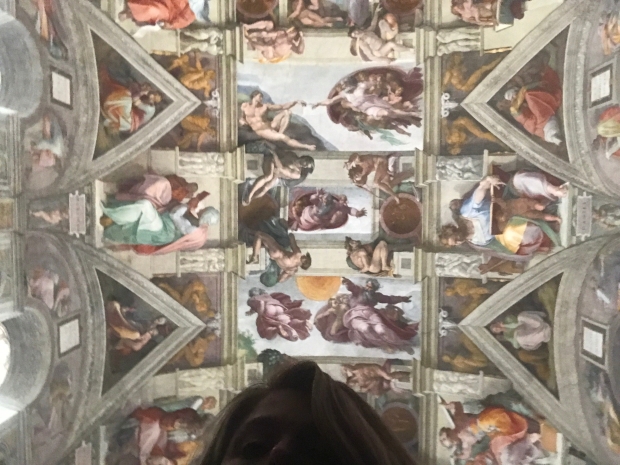 I couldn’t help myself. I needed at least one picture to prove I wasn’t dreaming.

After touring the main museums we were brought inside the Sistine Chapel. When inside, no photos or videos are allowed (whoops). And it’s not just to protect the integrity of the art. After centuries of voting on new Popes, the candles that were burned during the process began to leave a black soot on all of the artwork. In order to restore all of the paintings it was going to cost MILLIONS of dollars, so The Vatican put out bids for people who wanted to restore the Chapel. And some TV station in JAPAN won the bid – pus all the photography and video copyrights to it. I’m pretty sure the copyright is expired by now but that’s still the reason our tour guide told us we can’t take pictures.

When we finished admiring Michelangelo’s work in the Sistine Chapel we headed to Saint Peter’s Basilica where we saw Michelangelo’s Pietà. He carved it from a single block of marble at 23 years old and it’s known to be one of the most perfect sculptures ever sculpted. The Pietà depicts Jesus in His mother’s arms after His crucifixion and Mary appears much younger than she would have been at the time of His death, which has led to minor controversy among historians. Some believe she looks young to symbolize her perfect purity while others think it was to symbolize something else. Full disclaimer: I’m Catholic and I liked the first explanation so I didn’t bother remembering the other reasons. 🙂

After the Pietà we were brought through the Vatacombs, underneath the altar, to see the tombs of Popes and Saints. We weren’t allowed to take pictures, and honestly, I didn’t have much desire to. It was a spiritual tour and I appreciated being able to pray for and honor their souls privately. Once we finished in the Vatacombs we were on our own to adore the rest of the Basilica.

In the center of the Basilica is the altar which sits on top of the burial site of Saint Peter, one of Jesus’ twelve Apostles. In the Catholic Church, one of the reasons his burial site is so important is because he was crucified upside down. When he was to be crucified he didn’t believe he was worthy to be hung the same way as Jesus Christ and so he was crucified on the Cross with his feet above his head, honoring Jesus until his very last breath. To the right and left of the altar there are four sculptures which depict Jesus’ crucifixion and imbedded within those sculptures are pieces from the cross Jesus was crucified on. I’d like to think that regardless of your religious beliefs you can’t help but feel a sense of awe and wonder inside Saint Peter’s Basilica; if not for the overwhelming sense of faith and fellowship felt within but for the incredible artwork that fills it and the observable devotion the artists who contributed must have felt while creating their masterpieces in the name of the Lord.

The longest line we waited in throughout the entire Vatican tour was one to rub the foot of a bronze statue of Saint Peter. You can see his toes and foot are worn down because of all the people who have made the pilgrimage to the Vatican to touch his feet throughout the centuries. I don’t exactly believe touching his foot granted me Grace or good fortune but it was worth the wait.

After almost four hours and likely two or three miles worth of walking, we finally finished our tour of The Vatican, so I commemorated our tour with a gelato in the Vatican City.

Mom needed to rest before we made our way to the Colosseum so we stopped back at the AirBnb for a quick nap before we began our next tour. Unfortunately, our nap turned into a slumber and she didn’t wake up until the next day. Luckily, I woke up after a few hours and had my own adventures during my last evening in Rome.

When mom finally woke up we made our way to the Colosseum. My flight to London was early in the afternoon so we only had a couple of hours to see the rest of the sites. Which in reality meant we only had time to tour the Colosseum, where we were on our own. We had our skip-the-line passes so we got in quick and there were enough tours going on that we could drop in and out to listen to the tour guides as we pleased. Since the Colosseum is such a significant piece of history, we felt like we knew what we needed to know for the most part and instead spent the majority of our time marveling at the architecture and trying to imagine what life was like when people used the Colosseum for more than historical tours. 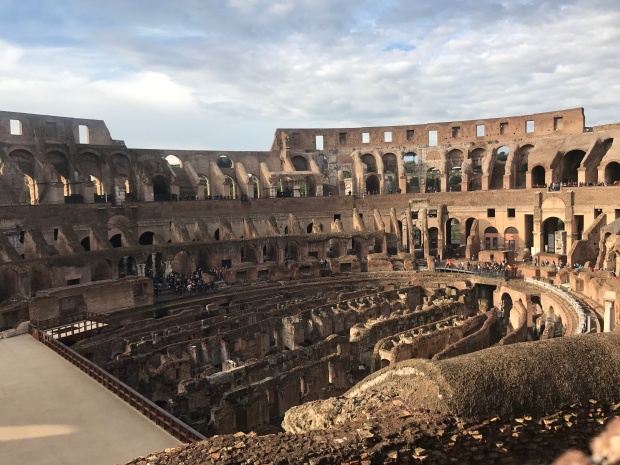 When we finished our tour we tried catching a train back to our AirBnB but as luck would have it, there was an organized railway strike throughout the entire country. So we stopped for wine, pizza, gelato, and wifi at Oppio Caffè while we figured out how we were going to get back.

[Apparently that’s a thing in Italy. But they’re always scheduled in advance so it may be something to consider when planning your own trip.]

After brunch, it was time to head to the airport. I contemplated skipping my flight and staying in Rome for a couple of more days but Marta and Derrick and tea and crumpets at The Ritz London were waiting for me in England. So I said see ya later to my mom and my soul city and went on my merry way. But the Eternal City and its people, its architecture, its food, its history still enchant my dreams while my heart waits patiently to return {which I will, because I threw about €10 worth of coins in the Trevi Fountain}. To gelato. To happiness. To coin-tossed wishes. To centuries-old marble buildings and marvelously intricate statues on random street corners. To love. And to the part of my soul I never knew to be missing until I found it in Rome.

I could go on and on about how incredible every second in Rome was, but I’ll stop now and hope I left you with enough wanderlust to start planning your own trip! Is there a city that stole YOUR heart? Have you been back yet? What advice do you have to anyone who wants to visit? Share below!

5 thoughts on “Veni Vidi Amavi Roma: I Miei Ultimi Due Giorni a Roma”

Like most millennials, I’m a typical 9 to 5 office worker always dreaming about my next adventure. But unlike most, I love my job too much to actually leave it. So I like to think of myself as a 5 to 9 nomad; backpacking, traveling, and exploring as much as I can once I’m off the clock. And this blog is my way to document my adventures.

There was an error retrieving images from Instagram. An attempt will be remade in a few minutes.